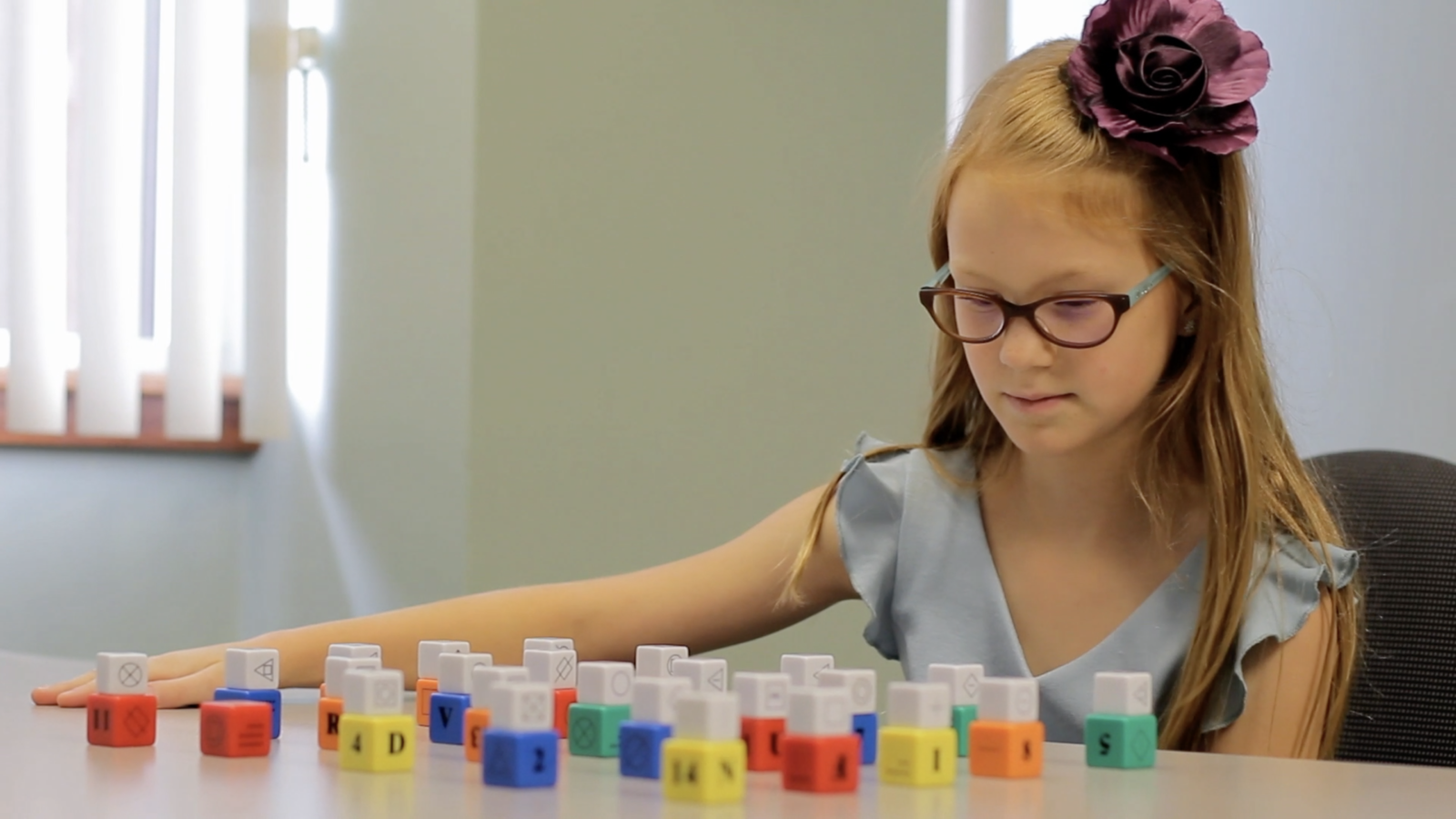 When a child struggles in school, the reason is not always apparent. After consulting physicians, psychologists, teachers, or other professionals; sometimes parents may feel like they’re at a dead end with no answers as to why their child is struggling, especially when their child is a good student. Perhaps the answer lies within the child’s vision.

When binocular vision is affected, a student will often struggle with reading and learning. They may be unable to stay focused on a task, complain of headaches, or avoid schoolwork altogether. To find out what is affecting a child’s ability to read and learn may only take a quick exam with a developmental optometrist or primary care optometrist.

In the text below, Kelli describes her daughter’s vision and learning story and how vision therapy improved her life in and outside of the classroom. To see her success story video, please scroll down to the bottom of this page.

“Peyton was in preschool when she received her first pair of glasses, and with them, her vision was deemed a “perfect 20/20”.  I wish I had known then that having 20/20 vision while looking at an eye chart didn’t mean a person has perfect vision all day.

I began homeschooling Peyton in first grade and was alarmed with how long it took her to remember words such as “the” and “as.”  She dreaded reading and was extremely fatigued after our school day together. This went on for the next two years, and by third grade, Peyton was certainly reading better, but she would do anything to avoid it.  She could read bigger words, but would still skip small ones. Her self-esteem started to drop when her younger sister began surpassing her in schoolwork, and she saw how much easier math, reading, and writing came to her.

One day, Peyton told me the words were moving around on the page.  She said they would jump around and she couldn’t follow them. While trying to figure out our next step, I came across a homeschool parent on social media praising Wow Vision Therapy for helping her child improve their reading.  Immediately I went to the website, and after learning about how vision therapy could help Peyton, my husband and I agreed that she should definitely try it.

Dr. Bartolini put Peyton at ease during her initial consultations and testing. Right away she was diagnosed with Convergence Insufficiency.  She explained that her eyes were having trouble working together and that became pretty obvious to us while we sat in during her testing and watching her trying to track objects.  We also discovered that Peyton saw words become double, blurry, and move around.  Our hearts were broken to realize that she thought this was normal… no wonder why she tended to avoid near tasks like reading and even working on crafts!

Dr. Bartolini paired Peyton with Miss Angela, and we could never ask for a better vision therapist.  For the next six months, twice a week, MissAngela would do specific exercises that were just for Peyton during her one-hour sessions.  Peyton worked on her visual memory, training her eyes to focus on objects up close, and working on getting her eyes and brain to work better together.  They used new technology and many games and activities to accomplish all of this. She even memorized all the presidents as part of her therapy! Peyton also had “homework” at home during the days she did not attend therapy.  About two months into therapy Peyton asked us if SHE could read to US! That had never happened before! I noticed over the next six months that her writing was staying in the lines, math was becoming easier, she could read without skipping words, and if she did, she caught herself immediately, and best of all, she actually wanted to read and found that reading can be fun!  In the last month of therapy, I asked her if the words moved around on the page or looked blurry, and she looked at me and said, “No! Why would they do that? They don’t move around anymore!” 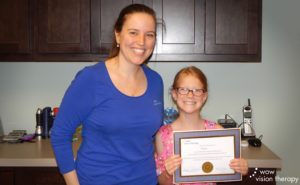 The hardest part of vision therapy was actually leaving vision therapy!  Peyton loved going to her sessions each week and working with Miss Angela.  She encouraged Peyton, challenged her, was fund and kind, and believed in her.  Graduation from Wow Vision Therapy was a beautiful, proud time, but also bittersweet in having to say goodbye to Miss Angela and Dr. Bartolini.

At Peyton’s last round of testing, it was found that she has surpassed all the goals that Dr. Bartolini set for her!  Peyton no longer sees double, blurry, or her words moving. Her visual memory has improved, and math facts are starting to stick better.  She often now has her nose in a book.

We had begun recommending Wow Vision Therapy early on when we started seeing improvements in our child, but now that Peyton has completed her sessions, we highly recommend vision therapy to anyone struggling with vision issues.

Peyton is too young to fully understand the impact Wow Vision Therapy has had on her life now and in the future, but we do, and we are forever grateful to everyone here, especially Dr. Bartolini and Miss Angela.

Thank you from the bottom of our hearts.”