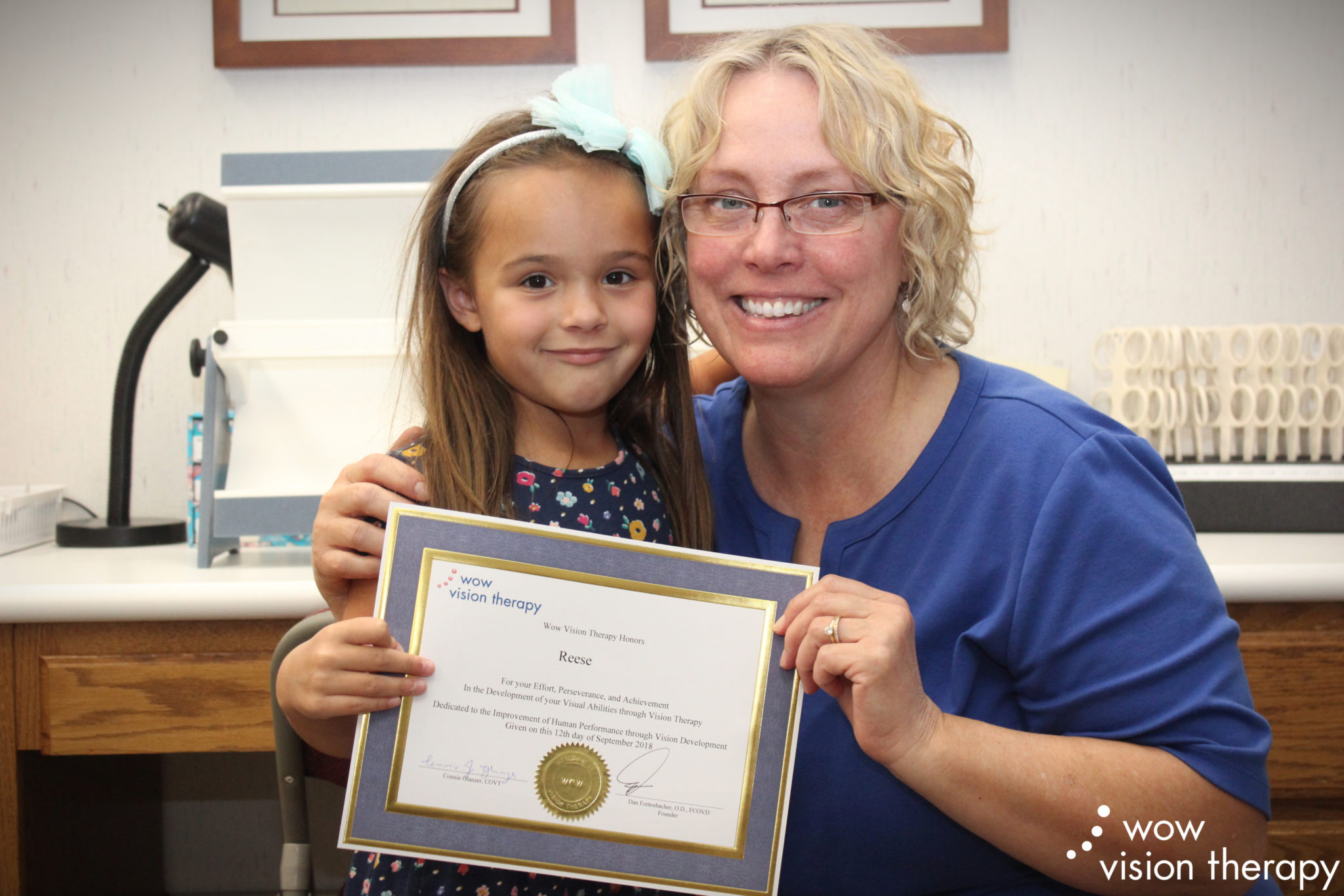 “Reese was graduating from Occupation Therapy at Memorial Children’s Therapy Center at the end of summer of 2017. A service she had received through early on services as well as MCTC since 15 months old. She was holding her pencil/crayons correctly and cutting. She could recognize a lot of letters. However, she wasn’t attempting to write anything, not even her name. She could spell her name by saying it but wasn’t even trying to write it. She could also recognize her shapes but was not really attempting to draw them. Every time we tried, she would get very upset and say it was too hard.

She has always liked to color, but it felt like she was way out of the lines all the time. She was a big scribbler, and it seemed like it was time to start staying in the lines, or at least “try” to. Any time we tried to help her, she would get frustrated and want to stop. Reese was also very clumsy, bumping her head, running into things, didn’t seem to know where her body was relative to objects. Reese also struggled to make eye contact with people.

We started vision therapy in Fall 2017 based on our OT’s recommendation. Within just a few weeks we saw her drawing and coloring really take off. She went from scribbles to drawing rainbows, people, our family, and our dog. Her drawings have become more and more detailed. She loves to paint now as well. Art is one of her favorite activities, and right now she wants to be an Artist when she grows up. She now gravitates towards these activities; she will ask for help when she needs it but doesn’t say it’s too hard before attempting the activity.

She also started writing her name within the first month or so of starting vision therapy. She can write her first and last. She can draw all her shapes, and she can write any letter we ask her to. It was really fun to watch her go from being able to see and know her letters to being able to write them all lower and upper case. Once it wasn’t so hard to see and look at them, she was able to trace them, and then make them herself. 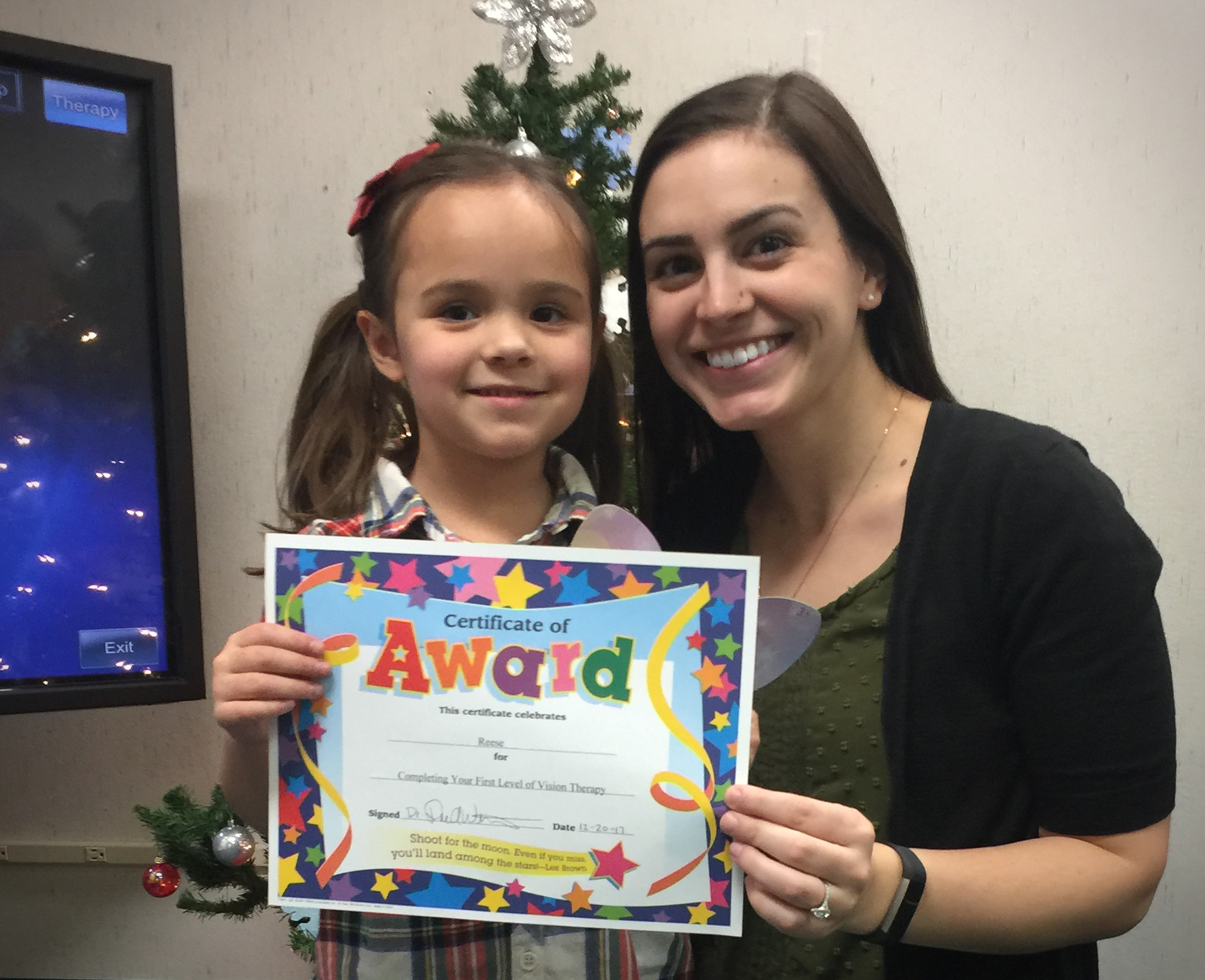 In December of 2017, we took a break. Reese was doing full days of school and vision therapy two times a week. She also receives speech therapy, so she had that every other week as well. She was getting a bit worn out from all the hard work. We also felt she needed to mature a little bit. We returned to Wow Vision Therapy Summer of 2018 to start our work again. Reese sometimes had a hard time staying on task and focusing. She was closing one eye to try to focus in on objects still struggling a bit with eye contact; we wanted her to improve a bit more with her writing/coloring.

Reese worked really hard all summer. We came two times a week in the morning. She was super excited to see Connie and work with her. (She still now asks if she can go play with Connie!) We made each day fun by doing a fun activity in St. Joe every time we were done with vision therapy, such as going to the splash pad, have a picnic on the bluff, or ride the carousel. This helped encourage Reese to practice at home too. We tried to keep everything fun and encouraging. We saw a lot of improvement in her coloring abilities and writing abilities. She has almost phased out closing one eye to look at things. She can make and hold eye contact (as long as she is willing).

We look forward to parent-teacher conferences this fall because we are hoping she is more focused in the classroom this year. We have witnessed her go from not trying and saying it’s too hard, to being able to accomplish age-appropriate tasks. We are so proud of how hard Reese has worked and how much she has accomplished with the help of Wow Vision Therapy!”