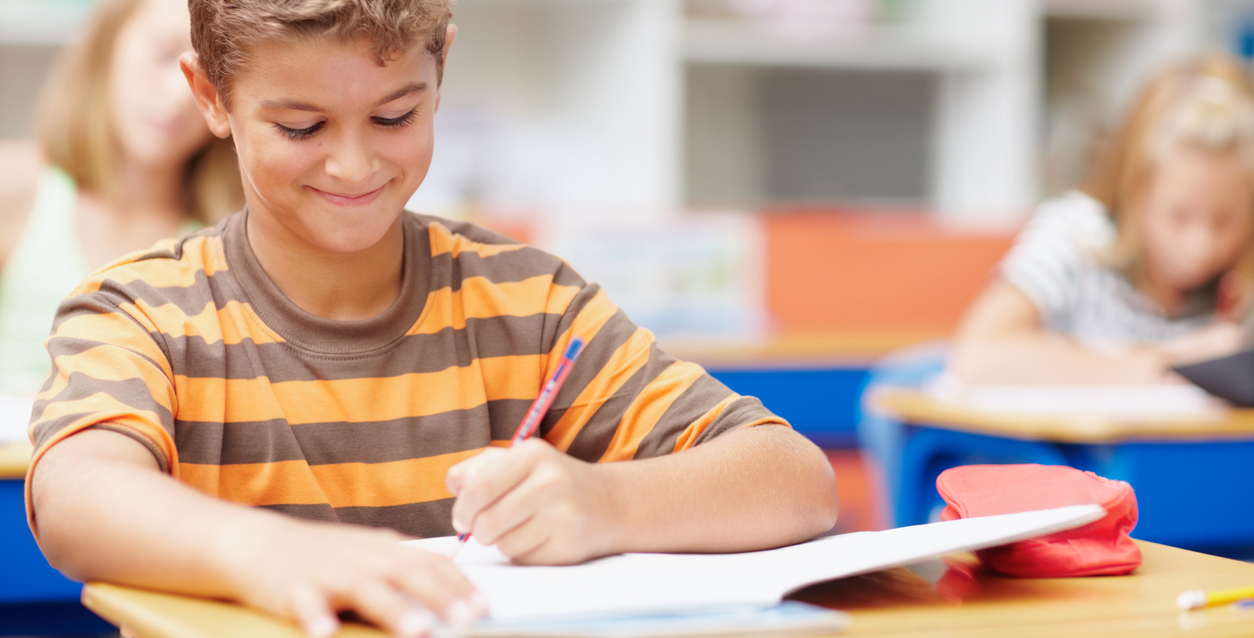 In this amazing testimonial, one family from Grand Rapids, MI explains how vision therapy changed their son’s life for the better!

Lucas, 11, had been struggling in school. Lucas is a very outgoing guy and makes friends easily. He is smart but struggled when it came to school work. His teachers often described him as smart and social but struggled with focusing. His grades around reading, comprehension, and writing were all C’s or lower. He hated going to school because of the work but enjoyed his friends. We had him enrolled in summer tutors and special classes to help him improve. We also spent 20-30 minutes reading with him every night. We pushed him hard, harder than our other two, but nothing seemed to help him get where he needed to be. He knew he was being treated differently and started to struggle with feeling dumb. We were looking for answers and losing hope.

We first heard about Vision Therapy from a friend who had recently enrolled her 8-year-old son. She shared some of the struggles her son was going through, and they sounded similar to what Lucas was experiencing. She told us about the initial testing, what they learned through the process and how vision therapy was going to improve their son’s life. Improvements that they were already seeing weeks into therapy. We found hope in this new option and scheduled a consult.

The first time we went in, the staff was super nice and spoke to Lucas as a person versus a kid. The doctor explained each of the tests and what it would be like to attend vision therapy. Lucas found instant joy in the methods because they were less like work and more geared towards fun and things he could accomplish. At the consult, we were informed of some of the reasons Lucas had been struggling. For example, when reading from the whiteboard and transferring the information to his notes, he had been reading one letter at a time versus remembering a word or more before moving his head and eyes to his paper. This was creating overworked muscles and a lack of retaining and comprehension, which all added up to a lack of self-confidence and a feeling of self-doubt. Lucas had been trapped and held back by the way he learned to read and write, and vision therapy could help him learn a better way. We signed him up immediately! 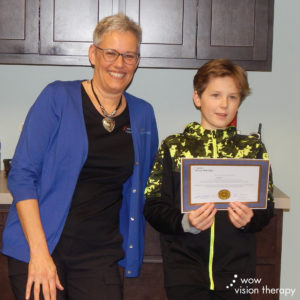 Lucas has just graduated from Wow Vision Therapy and what a difference these past few months have made! The work at home was critical to his success. He was tired after school, but we pushed him to complete his exercises. Each and every week we could see small improvements in the speed of his reading and comprehension in the stories. He didn’t always pass the tests the first time, but he would stick to it and pass on the second or third attempt. Eventually, we saw improvements in his school work, and not just in spelling, but all classes were coming back with B’s and A’s on his homework and tests. His first report card since joining had improved across the board. He is now becoming an A student! Then we started to notice something that we didn’t expect, and that is his self-confidence. He had always been street smart and made friends easily, but now that he is an A student, he began to be more outgoing and more confident in his relationships. He is happy and proud of what he’s accomplished and no longer held back. This has been by far the best gift that anyone could have given to Lucas. The gift of learning to read and comprehend through effective eye movement and behaviors.

We would highly recommend [Wow Vision Therapy] to others and completely support sharing our story as it may help others who have lost hope and want the best for their child. You will not be disappointed!

Thank you for reading!

Concerned you or your child may be struggling with a vision problem? Schedule an appointment today with one of our teams.

Disclaimer: The patient, parent or guardian in this story has authorized the use and disclosure of the patient’s name, photographic/video images, diagnosis, prognosis, treatment plan, and/or patient testimonial.