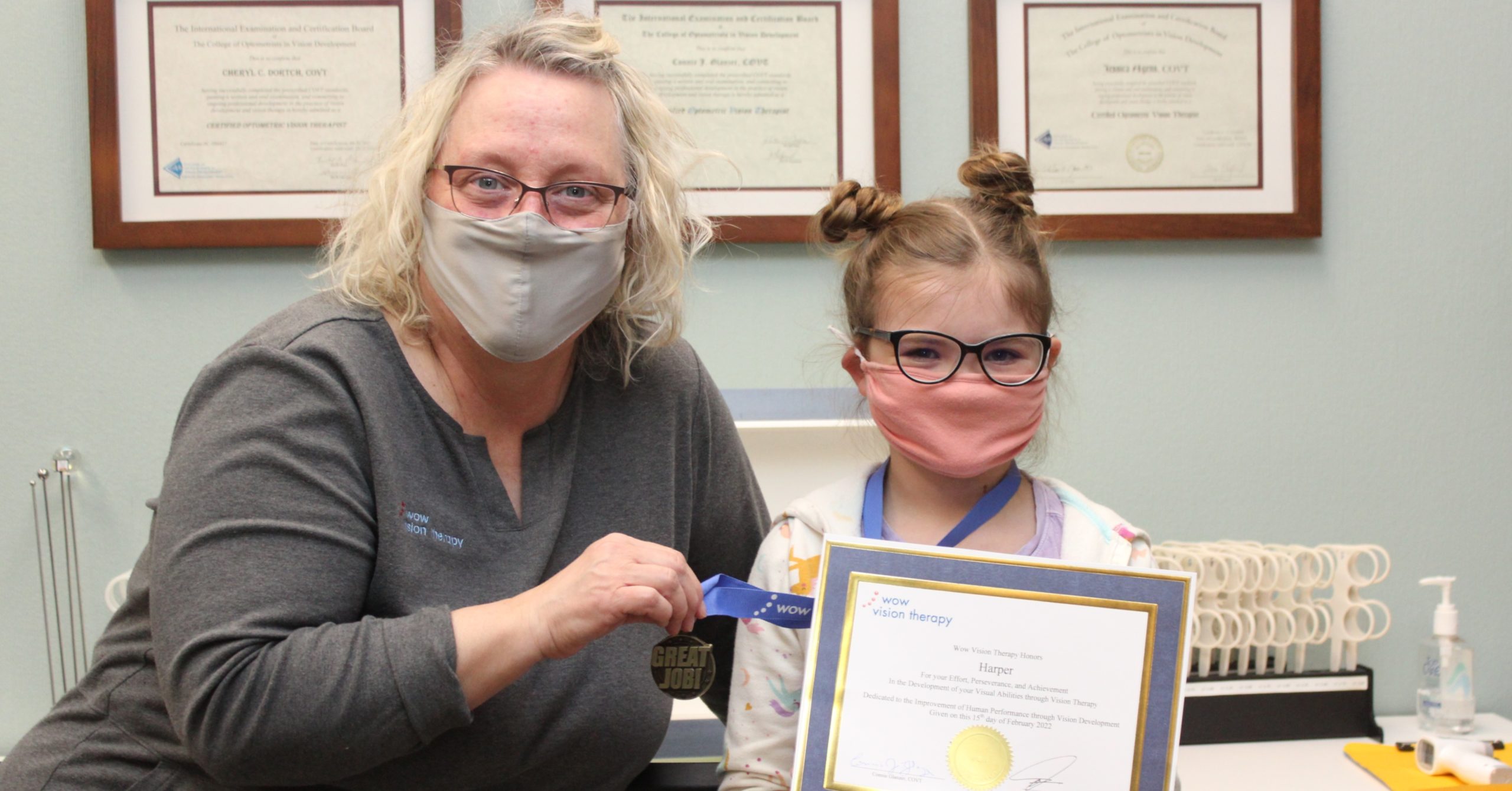 By: The Heyes Family

Our Journey with Harper’s vision started back right when she started kindergarten. Before starting school, Harper had to receive a vision and hearing screening. During this appointment, unbeknownst to me, Harper really struggled to see. As parents, we never noticed her struggling at all with her vision until this point. After she had failed that screening, we took her to her eye doctor, where she got her first pair of glasses. She wore her glasses for a year, and at her one-year check-up from that, it was there that her doctor recommended seeing Dr. Fortenbacher. Harper’s eyes had not improved at all and had even gotten a little worse. This was when we started our relationship with Wow Vision Therapy.

Our First appointment was our initial exam with Dr. Dan. I was told over the phone that the 1st appointment would take roughly an hour. And then, from there, the second appointment would be around the same. To save us a trip from traveling, they could schedule both of these extensive appointments on the same night, just broken up by half an hour to give Harper a little break. Our first exam probably started normal, but when we were about 90 minutes into what was supposed to be a 60 minutes appointment, I started to get a little concerned as a mother. I had noticed Dr. Dan checking and checking and rechecking, which was comforting to see and a little nerve-racking all at the same time. About 2 hours in, he stopped and updated me on what was going on. He was in quite a disbelief about what he was seeing with Harper’s eyes, which led him to keep rechecking to confirm his findings.

Harper’s prescriptions in her eyes were so drastically different from each other that her brain literally shut down to her left eye, preventing her from seeing out of it. It was there that he suggested getting her in contacts and glasses.

Upon working back and forth with Dr. Dan and Harper’s primary eye doctor, we got her prescriptions figured out and contacts and glasses fitted. When we went back into her primary eye doctor to check her contacts and glasses, in my head, I thought this would be a much smoother appointment. I thought, well, we have her corrective lenses in place; she should be able to see just fine.

Eye doctor appointments with Harper up until this point were a huge source of anxiety for her. We would always leave typically with her in tears, and I stressed to the mas. It wasn’t until this appointment that I realized her anxiety was because she simply could not see. This is when it all made sense to me. Just because she had all of her corrected lenses, that wasn’t the only fix. We now had to address that her brain decided not to put any more energy into her left eye.

Enter our vision therapy appointments. Harper quickly grew a very close bond with her therapist Connie. We were coming into therapy twice a week and doing therapy at home for the remainder of the days.

Throughout this time, there were many calls with tips and tricks for getting Harper comfortable with some of the exercises in her therapy. We learned that although she was so excited for her Oculus, she was probably the only child that I know that hated it because it was uncomfortable on her head. As parents, we broke out every option trying to get this thing to feel less heavy. Eventually, we decided we needed to explore other options for her to participate in her at-home therapy willingly. We spent many nights playing checkers with different patches, playing video games with varying cellophane sheets on parts of our TV, and making fun checklists to get Harper excited about finishing different exercises. I think throughout this process we’ve all experienced every emotion. Pride in our little girl for watching her balance all of this with school, extracurriculars, and also just being a 6-year-old little girl who might not always want to have to do this for an hour every day. Frustrations with the fact that she wasn’t always the easiest participant. Worry that her eyes wouldn’t improve. And hope that all of Harper and our hard work would prove to be worthy.

After about four months, it was time to go back to her normal eye doctor to shift her glasses and contact prescription. After many stressful appointments, this was a turning point. This is when that hope that we had started to prove itself. Her vision is improving! So we continued down this path. Through each season, with every kind of weather, our Mondays and Tuesdays after school, she hung out with Miss Connie. She worked hard to make her eyes better. Here we are a little over a year later, and I am beyond thankful that the team here at Wow Vision Therapy brought to light the struggles that our little girl was having because we did not see them. Which later on, we learned as common with kids as young as Harper was when she started. Kids with amblyopia tend to adapt since they don’t know the difference. I feel confident that Harper’s future is going to be dramatically different thanks to her eye health being better. So although it was a little bit of a long road, and at times challenging, we would not change our decision or our experience with vision therapy. From our family, we would like to extend a very heartfelt “Thank you.”

To learn more, please fill out the form below and one of our Patient Care Coordinators will be in touch to answer your questions or help schedule an evaluation for you.